“If dreams came true, oh wouldn’t that be nice…” (Prove It All Night, 1978)
Since I started Burgers and Bruce the two questions I’m always asked are “have you met Bruce Springsteen” and  “do you know if he even likes burgers”.
It was always a sad “no” to both. I did some research on the second question, and accepted the fact that the first was extremely unlikely, at best.
But this weekend I got lucky. I’m a big believer in things happening for a reason. To realise Bruce Springsteen is staying at the same hotel as you…It’s exciting, but actually pretty terrifying.
I had to ask if I could have a quick picture…
He called me “kid” and said “sure why not”. I didn’t tell him I’m not a kid, because Bruce is The Boss – he can call me whatever he likes. 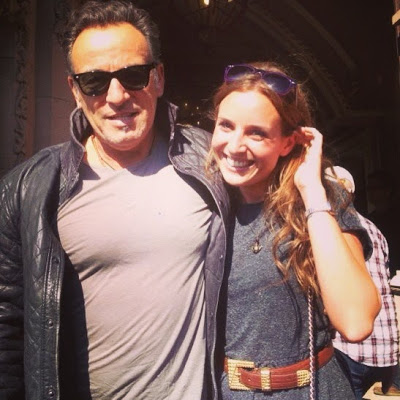 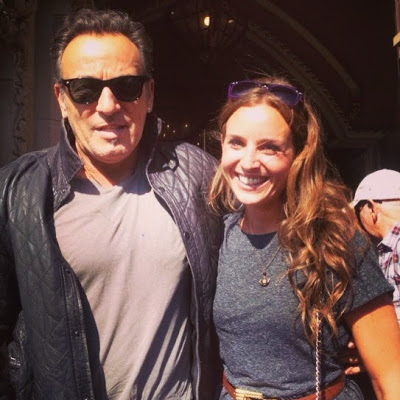 I took this as my chance to ask him about burgers.
Me: “Bruce can I ask you a quick question?”
Bruce: “Depends how difficult it is to answer…” (He’s witty).
Me: “I just want to know where your favourite place to eat burgers is?”
He tells me it’s a tough one, and looks like he’s really thinking about it. Maybe there are too many to choose from? He ponders more and I ask him if he does actually like burgers.
Bruce: “Pfff, what do you think!”
I bloody KNEW he would. I tell him to have a think and let me know.
I was so happy. Bruce was friendly, he’d told me he loved burgers and I’d got some quick pictures. I went on my merry way, not sure I’d actually get the answer to my question, but over the moon anyway.
Later that evening I see him again. He points at me with a “Hey kid” and then a new name “Burger Girl” (can this be my new nickname please…)
I ask him nervously if he’d had a chance to think about his favourite burger spot yet.
He stands there. I’m sat down on a sofa looking up at him, getting redder by the second probably. He pulls up a seat and leans in….so I lean in….And then he just starts talking.
“I used to eat a lot more burgers you know, when I was younger. But my shirt, it was getting tight!” I nod enthusiastically at his joke, yes, I know how this feels.
He stops and asks me, “Why are you so into burgers anyway?”
I explain about Burgers and Bruce. How the idea came about before seeing him play in New York, while eating a burger. I tell him it’s about my travels around the world to his concerts, the experiences I have, the food I eat, the incredible ‘Bruce Buds’ I meet. I show him my blog. I can’t believe it, because I’m showing him a blog about him, and according to him “it’s very cool”.
My Bruce Springsteen blog is Bruce Springsteen endorsed. No I am not dreaming.
Then Bruce tells me about the burgers he likes. He chats away, and he smiles when he talks about them. He talks slowly and passionately and is effortlessly cool. He doesn’t like anything fancy…he loves them “very very simple”.
He knows a lot about burgers. He shares some of his wisdom with me: “A burger in 1950s America. It’s nothing like what you get now. A thin little patty, squirted with ketchup, and that’s the only type of burger there was. So I still have a fondness for a good diner burger”. He likes the soda syrup mixed properly and the right style fries. Apparently “Johnny Rockets does it pretty good”.
Bruce continues, “There’s an art to it, but it’s mostly lost. There’s only a few places that sell a really good diner burger”.
A fuss free, unassuming, old style diner burger. I’d hoped that might be the answer.
I then ask him if he’s tried a Shake Shack, one of my favourite burger places. He says that he hasn’t, but that he’ll have to “check it out”. I hope he does. Sounds like he’ll like them.
Of course, I forget to ask him if he’ll go for a burger with me. Maybe I knew the answer to that one already.
But I did tell him how my dad would rock me to sleep to his music. How we used to listen to Born To Run in the car, volume up, windows down.  I told him how that’s how it all started. So he writes a note to him. 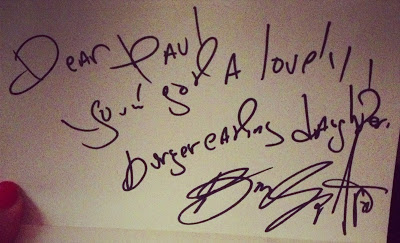 So I wanted to share some of the conversation with fellow fans, because I hope it’s one you’ll enjoy.It’s not just about the burgers.  He was charming and relaxed, and most of all – he’s a dude! But I think this conversation is just one of the many examples of how Bruce Springsteen cares about his fans. And that’s why we do what we do.

I hope that when I met him I did a good job of I representing the majority of other Springsteen fans. He knows how far we travel, the money we spend, and he doesn’t take that for granted.
Forget the saying “you shouldn’t meet your heroes”.
I couldn’t have asked for anything more when I met mine.