Not long ago I wrote about one of the hottest burgers on Manchester’s burger scene, Almost Famous. On the same weekend I went on a bit of a burger tour and the next place I tried was SoLITA – a newish restaurant South of Little Italy in Manchester’s Northern Quarter (hence the name).
SoLIta is the place to visit in Manchester if you’re looking for your mac’n’cheese and pulled pork fix. Whilst this is offered in abundance in London nowadays, SoLITA’s one of the only places in Manchester to enjoy this. The menu is varied and there’s a lovely selection of burgers too.
I opted for the KFB, a combination of vintage cheddar, jalapeños, bourbon BBQ sauce and kentucky fried bacon (£11.90 with fries).
Before the burger arrived I was warned that they’d run out of brioche buns, but I didn’t feel put off by this – brioche buns are great obviously but there needs to be some variety out there. The substitute bun was still soft and white, a little floury and toasted on the inside as is the burger bun way. The burger arrives and stands tall on the plate – a carefully constructed tower of ingredients. 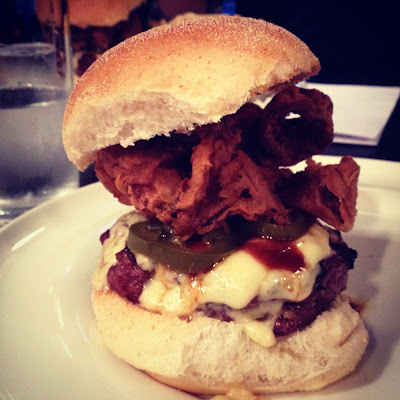 The main event here is definitely the patty – a mix of prime chuck steak and bone marrow, it’s moist, thick and cooked to perfection. SoLITA is the first restaurant in Manchester to have an Inka grill in their kitchen and the flavours it encourages the patty to take on are insane. For anyone wondering, an Inka oven is basically an oven run on charcoal instead of electricity or gas. The temperature of the oven (sometimes up to 500 °C) and the combination of roasting and barbecuing results in a brilliantly smoky and tender patty. 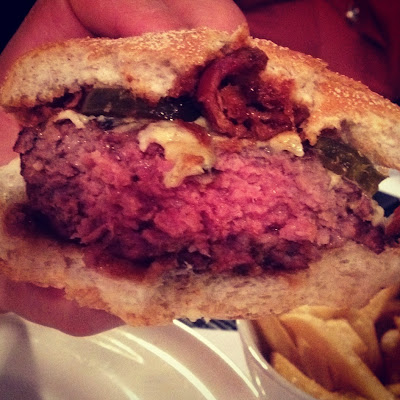 The only thing I would say, if I was being really picky, was that this smoky charcoal flavour did override some of the other elements of the burger – the bourbon BBQ sauce for example, and the jalapeños, which ended up providing more of a bite texture wise than heat wise.
Aside from the Inka oven style of cooking, the other part of the burger which is truly great is the kentucky fried bacon. Wowzers, I do love a bit of batter and the generous curls of kentucky fried bacon were salty, super crunchy and so moorish. As you can see from the height of the burger, they did make the whole thing a little tricky to pick up and eat, but I was happy to remove some and eat them on their own before breaking up the other bits and laying them out across the cheddar topped patty. 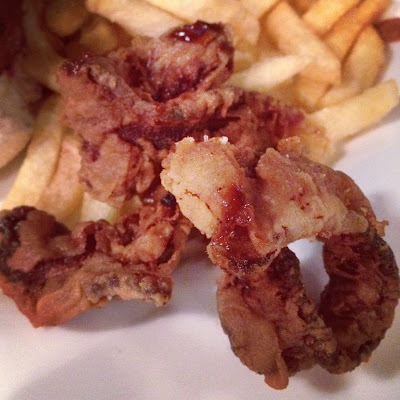 I do tend to prefer fries to chips and the french fries were very nice, if not a little overshadowed by the burger. 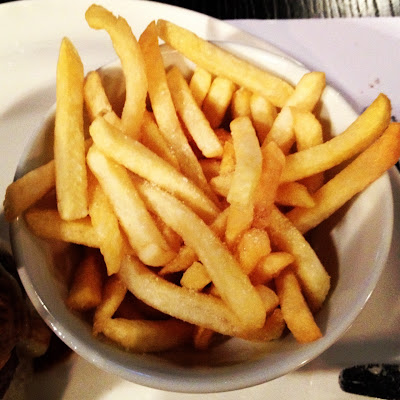 If there’s still room after this towering burger I’d recommended giving the Deep Fried Coke a go, a dish of cinnamon coated churros doused in Coca Cola postmix syrup and topped with a ball of vanilla ice cream. 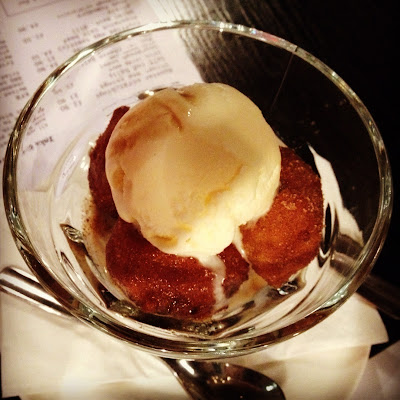 SoLITA’s got an urban modern interior – white walls, black furniture and splashes of red, it’s quite masculine and feels fairly smart – more restaurant than quick fix, eat and run burger territory. The price of the KFB burger is towards the top end of what I think a burger should cost, especially in Manchester, but I think the flavour of the Inka style of cooking makes it’s worth trying. A very good burger option for the city!

If anyone’s got any more burger recommendations for Manchester I’d love to hear them for my next visit!